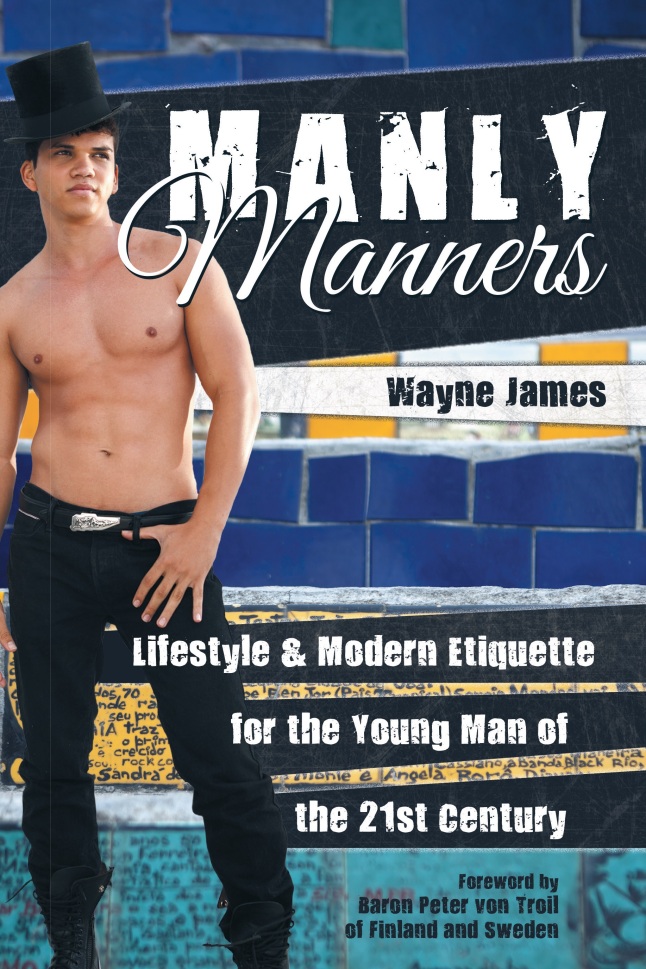 Former U.S. Virgin Islands senator and Senate Liaison to the White House Wayne James has just released his highly anticipated etiquette book for men, Manly Manners: Lifestyle & Modern Etiquette for the Young Man of the 21st Century. Published by the iUniverse division of Penguin-Random House, the provocative, edgy, 840-page book—the first of a three-volume treatise totaling 2,100 pages—has been in the making for six years. Since January of 2011, the author has lived on three continents and one archipelago—South America, North America, Europe, and the Caribbean—researching for and writing the treatise, which is already being called “The most comprehensive work on male comportment,” “Refreshingly inclusive and matter-of-factly cosmopolitan,” and “A tour de force.”

James, a Georgetown University law graduate, fashion designer, scholar of Danish West Indies history, and art collector, is also no stranger to controversy: In June of 2016, he waived extradition and was returned to the U.S. Virgin Islands from Italy in August to face Federal criminal charges for alleged “fiscal inconsistencies” during his 2009 – 2011 senate term. James was indicted under seal in October of 2015 and first became aware of the charges eight months later, in June of 2016. He has pleaded not guilty to all charges but was declared a “flight risk” and denied bail until October 7, 2016, when he posted bail and was released under 24/7 lockdown “home incarceration” pending the trial. The trial is scheduled for February 2017.

“Much has—apparently—been said about me while I was abroad on my writing-sojourn,” James said. “Now, after almost six years of rumors and false accusations, I will have my say in a court of law.”

Besides refreshingly covering conventional etiquette-book topics such as table manners, men’s grooming and hygiene, receiving lines, how to hold a glass of red wine versus a glass of white, and how to conduct oneself at an Audience with the pope, Manly Manners also delves into subjects once regarded as taboo or unthinkable for gentlemanly-types: what to do when detained by law enforcement officers; the etiquette of gay saunas, gloryholes, and fetish parties; how to “shop while ethnic”; how to survive prison; the etiquette of os impurum, irrumatio, anilingus, and cunnilingus; how to avoid being shot on a front porch while seeking emergency assistance in the middle of the night; delicate ways of suggesting an enema to a sex-partner prior to engaging in anal sex; and how to masturbate—correctly—so as to avoid contracting Peyronie’s Disease. The book, its Foreword written by Finland’s and Sweden’s Baron Peter von Troil, also has a substantial chapter titled “International Customs and Influences,” which discusses everything from what to do if invited to a wedding in India or Iran, a Bar Mitzvah in Argentina, a funeral in Japan, a business meeting in China, or a dinner in Dubai, to the protocol of a coffee ceremony in Ethiopia. Then there is a 200-page chapter—practically a book in itself—on how to plan a same-sex wedding from A to Z.

“My aim was to write a reference book that engages readers like a mystery or romance novel,” said James, dubbed “The ‘Bad Boy’ of Good Manners.” “The book entices young men, word by word, sentence by sentence, page by page. I envision males, ages 16 to 60, staying up late into the night reading Manly Manners—even if under the bedsheets with the aid of a flashlight!”

James will announce his book-tour and lecture schedules after the February trial. “Since June of 2016, I have been in four prisons and have seen and experienced a segment of the male population that has given me a more complete outlook on what it is to be a man in the 21st century,” James said. “My recent experiences, when put into the context of my eventful life, have made me especially qualified to speak to men from all walks of life—from the noble to the notorious—on matters pertaining to modern men’s lifestyle. I also have a thing or two to say about the ‘Presumption of Innocence’ and prison reform! Many a grown man would have succumbed under similar circumstances. But this is all a testament to one of my primary outlooks on life: ‘As you surmount the various obstacles on your road to success, you get a clearer view of your final destination.’ Besides, now I can truly say that I have friends in high—and low—places. And now I can speak about it all in a more Zen way,” James concluded.

Manly Manners: Lifestyle & Modern Etiquette for the Young Man of the 21st Century (ISBN: 978-1-4917-9427-2), distributed by Ingram Books, the world’s largest distributor of books, is available in hardcover, paperback, and eBook formats online at http://www.amazon.com , http://www.BarnesandNoble.com , and http://www.iUniverse.com , as well as in bookstores worldwide and at other online booksellers.